Based on the concept that "the urge to contribute is a human instinct", to seek human ways of living and how they can be put into practice.

We founded Homo Contribuens Research and Development Institute on 6 July 2003, and held a colloquium on the theme “To awake our human instinct of contribution to others and to act in practice” with free discussion style by the following members; 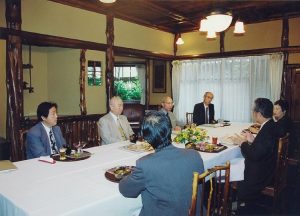 Below is the opening message from Hisao Taki, Chairman of the institute;

Human beings are creatures who contribute of themselves to their world; they are, in other words, Homo contribuens. We should stop to consider how, at the dawning of the twenty-first century of the advanced technology and information society with 10 billion people on this earth, all of us can help one another to live well. Surely it all depends upon how much consideration we accord each other and how much we contribute to our world. It must be that we are endowed with the instinct to serve the interests of others. If so, humankind can be called not only Homo sapiens and Homo faber, but also “Homo contribuens.” We can realize the true significance of our humanity when we awaken to the fact that we have an urge to serve others that is instilled in us by nature and go on to put that instinct to practice.

In the modern age, based on the dualistic concept of mind and matter, priority has been accorded to material goods, the economy, and status in society. In every realm of power or influence, whether it be political, economic, military, or even intellectual, it is stressed and taken for granted that the goal is to rival and surpass all others.

In spite of the expectation that the modern science and advanced technology of the twentieth century would bring prosperity and happiness to humanity, we have entered a new century facing such problems as destruction of the earth’s environment, the breakdown of peace around the world, widespread poverty in underdeveloped countries, and deterioration of society in industrially advanced countries. Rather than the problems being solved, they have expanded and deepened. We should recognize that all such problems have been brought about by human beings themselves, and that therefore their solution depends solely on what we do about them.

Recognizing these truths, we have founded this modest institute in order to reexamine the nature of “living” for human beings, to assess what was sacrificed in the name of modern rationalism and materialism, and to put into practice the principles of a genuinely human life. Our perspective and our goal is to awaken to and put into practice our instinct to contribute to others. As our first step, we held a meeting to discuss all manner of related issues, inviting participants from different fields including natural science, technology, human science, philosophy, and religion. This volume presents the results of our discussion. As we move forward to our next step, we look forward to the views and perspectives of the readers of this report.